sspoom said:
Just re loaded this one after a long hiatus.
I don’t even know where to begin...
Click to expand...

Tier 1, unless you have an old garage full of tanks. Tier 8 is your best money making tier, althoilugh tier 9 is okay for earning credits.

@sspoom Are you going to go full speed "free to play" or do you have some disposal income to spend?
If you have some money then the first thing you should do is buy a "premium" account. For how long is entirely up to you.
A premium account will save you a LOT of time. Primarily it provides you 50% more battle experience as a combat award. EVERYTHING revolves around how much battle experience you have to spend on tank improvements and a premium account speeds up that process enormously.
I would also spend a lot of time admiring the garage and the almost unbelievable amount of things to done there. Click around until you are comfortable with all that. It will take a while as the UI will practically be brand new for you.
-----
Just saw the results on some poll questions WG posed. About 2/3 of the responses were very negative on the "New Balance" proposed changes to HE shells and all shell changes in general. Tough for WG to proceed as sorta planned given the open community push-back. Go us!

I have a bunch of low tier tanks from my last go around probably 4-5 years ago.
Plus I got a few gifts I think.
I'm trying to figure/remember how to navigate the garage and upgrade the vehicles.

The UI has multiplied in size several times over since I first started. Taking the time to get a decent grip on it will pay off in the immediate future.
Any questions at all...we got the answers.

If you are grinding then the research button and tech tree are good places to start.

So Terry, 2/3’s of the players want the HE left alone? Good luck, they don’t give a shit.

True. But running a public poll and making the results known to everyone puts them into a tough spot.
It will look very bad for them, PD wise, to ignore their player base and just proceed any darn way they feel, regardless as to opinions of their customers. If they didn't want players opinions they shouldn't have asked. Not that they haven't done exactly that in the past, but this looks different. Now the dissatisfaction is out there for all to see.
I don't recall the details, but a few years ago WG also announced some proposed changes under the title "Rubicon" and the outcry was such that WG eventually trash canned the whole thing. So, there's hope.

When they going to survey about vheeled wehicles? I have some strong opinions in that subject...

Yeah, that would be veerrrrrry een-ter-rest-ink.
I'd like to see them have arty and cockroaches as an option for random battles. I bet the statistical results would shake WG good!
Their logic/argument for having arty is that it deters camping. Really? If there are 2-3 arty on the red team, I end up spending more time hiding from the clickers than I do playing the battle. Basically, arty encourages camping. At least reduce the amount of arty in MM to a max of 2 (preferably 1). Same thing goes for those vheeled wehicles.
Then, instead of making changes to things no one is asking for how about putting some time and resources into improved MM and more/better maps? That's how they can make the game better. Focusing on things like eliminating derp guns is waay off track.
-
I spent 1750 gold and bought this 3D skin for my Lowe. Pretty awesome. More of this kind of thing WG! 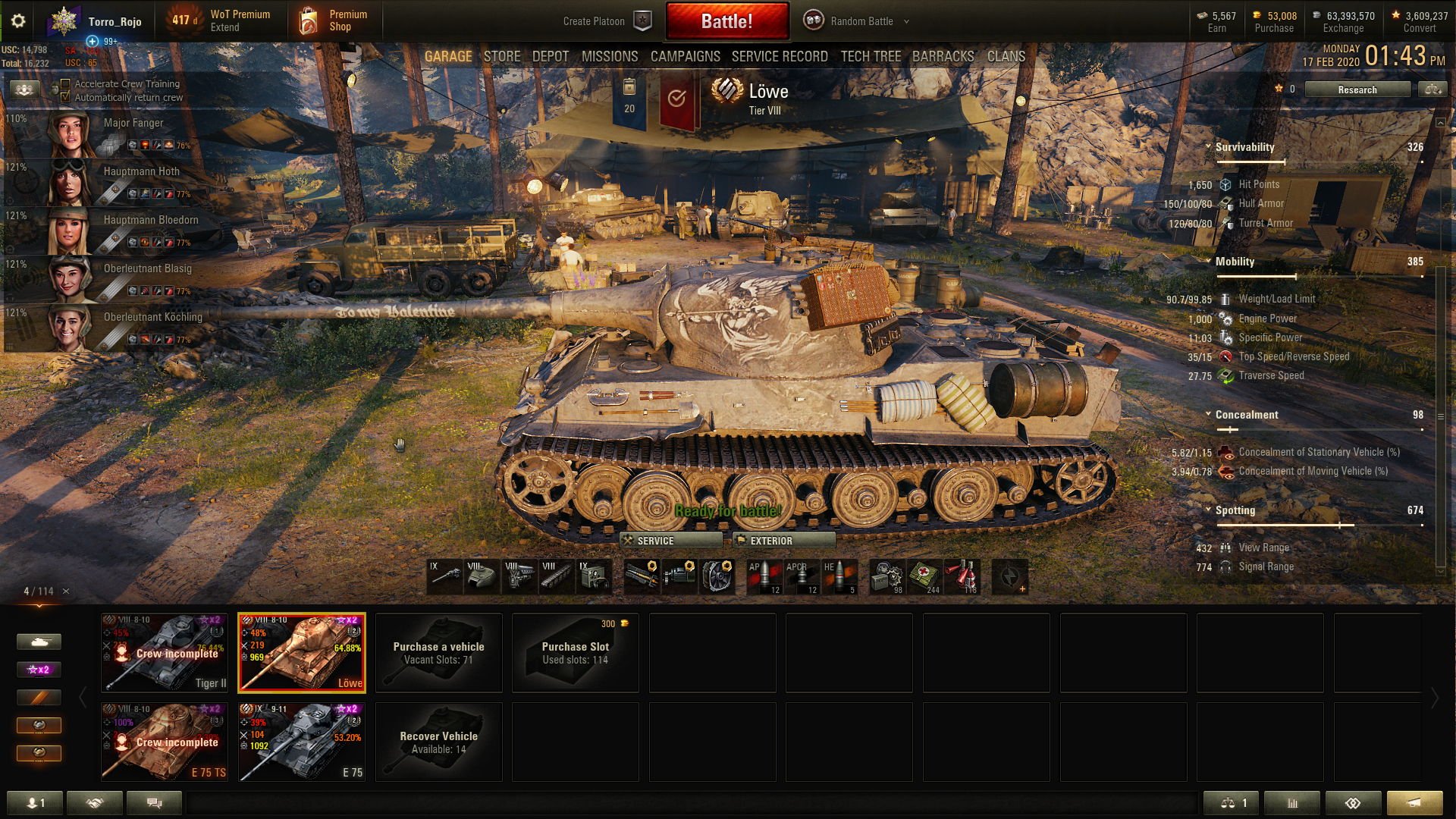 Well once upon a time when they were screwing around back and forth with the stun mechanics and damage from HE I believe they did cut back the number of arty to two per battle. I believe that is all there should be in a battle.

I have no issues with the matchmaker now that they've messed with it. My issue is with the wheelies. My opinion is that if they are hit by any gun larger than 120 mm, they are dead, period. No damaged wheel, no bouncing of shot that large, just dead. The kinetic energy from a round that size is going to screw a vehicle like that up in a bad way. The other thing they need to do is to limit their speed to allow for ground conditions. They only time they should hit top speed is on paved roads, 90% speed along the dirt track, trail features and 70% anywhere else.

And the lack of maps is embarrassing. We've discussed this over at PE 2 Redux ad nauseum. Every map they have ever released should be in the rotation. Unbalanced maps present challenges to the side on the unfavorable side of the map. Maybe that challenge would promote team cooperation. It certainly breaks the lemming cycle. I see the same movements and the same tactics over and over. I do weird stuff and move "outside the herd" just to stir crap up. Sometimes I am enough of a distraction that OPFOR focuses on my shenanigans and my team takes advantage of the distraction. That's if you have some heads up players.

Okay, what camo rating do you think an IS -2 -II has? Big tank, double barrel, goes invisible. How? Plus I am in my Skorpion G and all of a sudden I can not hit the Russian tank. Claus is on to something...

It would just be a distance thingie or some hard cover getting in the way.
So many variables involved with hit/miss mechanics. Won't even begin to try to figure that one out!
My G has a 4+ crew skill and a hard 0.28 dispersion rating. It doesn't miss often enough to bother me any.
Just watch a Dez Games You Tube describing the nerfing of HE/HESH rounds and the Death Star in particular.
Wow! The comments were brutal. Sure. Always lots of griping whenever WG announces changes, but this has a whole different feel to it.
A lot more vocal outrage than usual. Will be interesting to see how all this plays out.

I am not blowing smoke, I have a 3+ skill crew and same dispersion as you on my Skorp with a gun rammer, binocs and camp netting and my rounds consistently “miss” the double barreled IS-2, enough that it’s noticeable. And they consistently snap fire my rig. Like gun handling on as double barreled tank would be that good? Not buying that at all.

If we are having fantasy Russian double barrels, when are we getting the six barreled US M50 Ontos with 105 mm recoilless guns? At least they built some of those. And they fought in Vietnam with the USMC.
Last edited: Feb 18, 2020

WG is doing the same thing in WoWS, over powered Russian “paper” ships. For a navy with no real blue ocean naval experience fighting a modern navy. Oh wait, they got an “experience” in 1905 at Tsushima Strait.

I have a tank pz38t that has no crew-crew incomplete how do I swap crews or crew the tank?

On the upper left side of your garage screen is a small "crew operations" button. Directly below that will be a black void.
However, if you mouse over that area and LMB it a drop down menu will appear showing you available members for that crew position. LMB one and it will make the slot assignment.
I had the exact same question many years ago. LOL
About now I would also recommend you LMB "Barracks" to check out the UI and see what your available crew inventory looks like.
----- 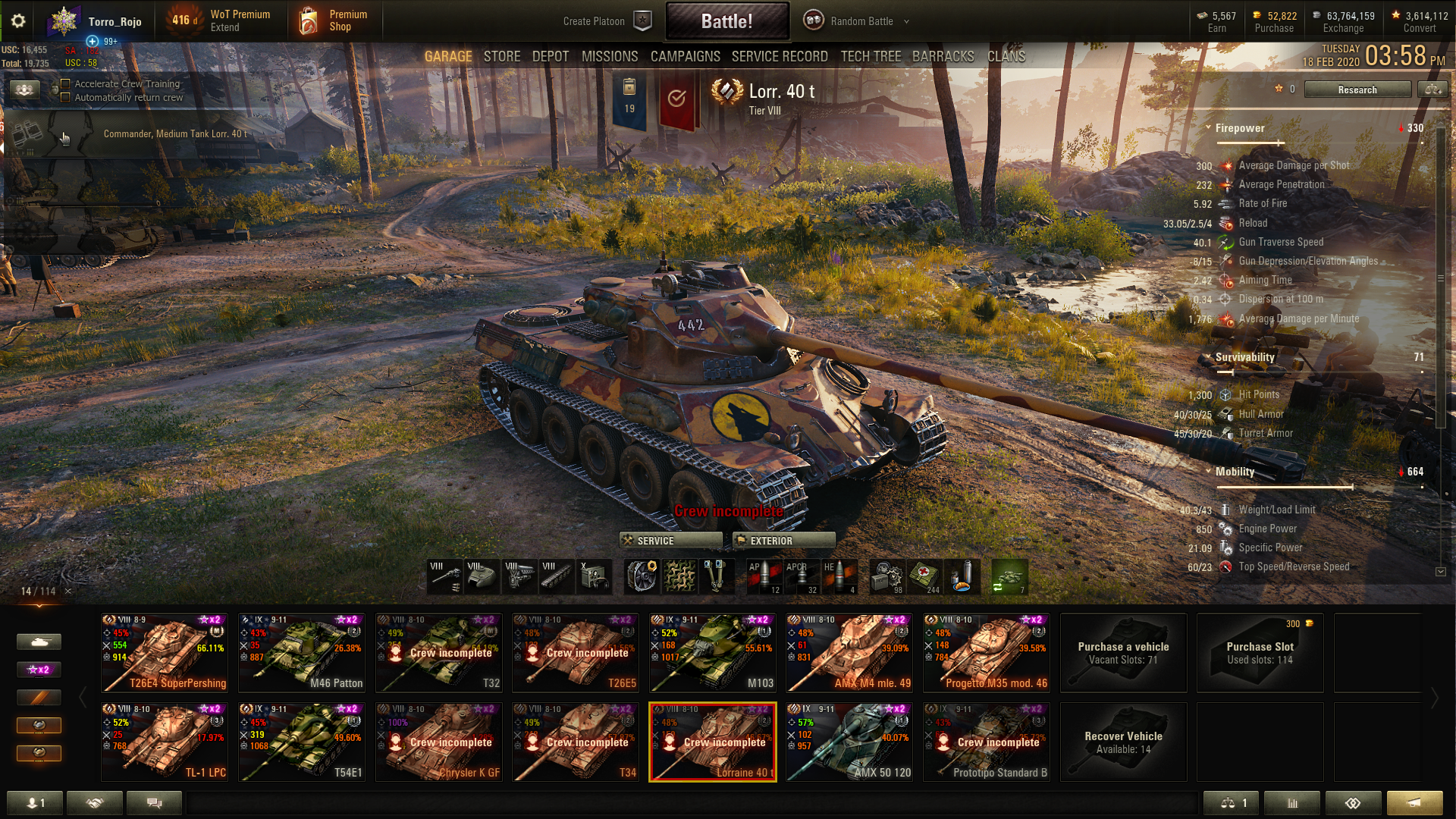 I remember being really frustrated that I couldn't figure out something, seemingly so simple, on my own.